Your cart is empty
Go to shop!
Product is not available in this quantity.

Your cart is empty
Go to shop!
Product is not available in this quantity.
Donate
←
Back
Home
/
Books
/
AI & Power

Loss of selfhood to artificial emotions and gratifications.

MATERIALISM VERSUS THE SELF (pp. 205)

….. Many technologists and futurists view living organisms as mere algorithms in which concepts like free will are meaningless. They model a human as a bag of meat driven solely by biochemical and electronic processes that we recognize as sensations, emotions, thoughts and even selfhood. Artificial Intelligence and neuroscience collaborate to produce interventions at various levels of our cognitive apparatus (see Figure 18); in effect, creating the means to hijack all the natural mechanisms that produce our emotions and thus drive our behavior.

The world’s largest wealth creation in recent times is emerging from the digital economy driven by computer algorithms that model human behavior at the deepest levels. This economy is going to get even bigger. The corporate giants of the future will deconstruct people into separately manageable biological processes and then use neural networks to monitor, understand and manipulate them. The self is being broken down into a definable series of sensations, emotions and thoughts. Each component of the self lends itself to external engagement by AI machines.

In these reductionist models, the self is nothing more than a pragmatic construct that serves as the nexus of individual desires and actions. The computerization of physiology and the use of AI to exploit biology and neuroscience will revolutionize commerce and industry, including shopping, entertainment, tourism, sex, games and sports, socializing and politics. Hardly any field will remain untouched.

The marriage between the life sciences and AI will disrupt existing societal norms. A new paradigm—considering the physical body as an organic computer—is emerging. In this paradigm, organic computers carry out biological processes the same way that silicon-based computers perform algorithms. Human physical and mental functions can be modeled as a set of algorithms running on the organic hardware that we know as our physical body.

Life scientists also claim to be able to use non-living mechanical systems to replicate the behavior of living systems. In effect, although they will not say so explicitly, this development is tantamount to creating what may be called artificial life. It is worth reiterating that such systems are not conscious, and further, that intelligence can be independent of consciousness. If our concern is with functionality in the world and not with the metaphysics of what we call life, it does seem reasonable to consider that such systems in fact behave like artificial life. This is to say, these are non-living systems that mimic the outward behavior of living systems. Figure 19 shows the ways life sciences and computer sciences are already collaborating. 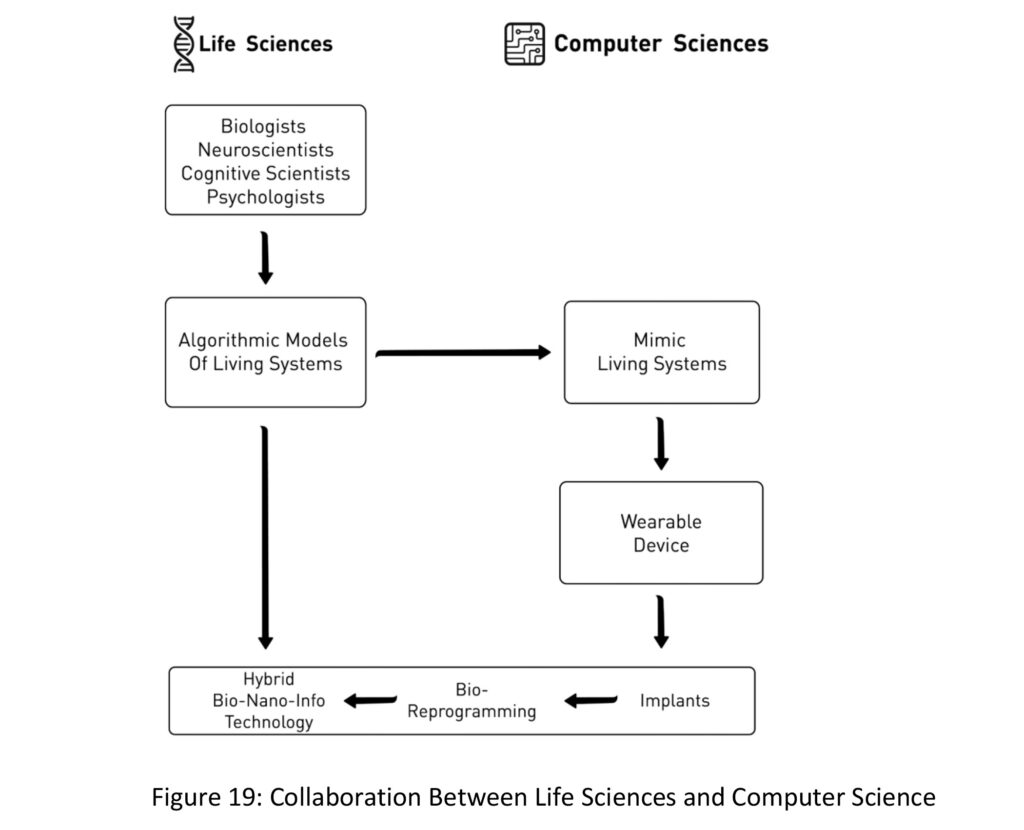 The Assault on Spiritualism (pp. 214)

Reductionism is an analytical method that breaks down a system for deeper examination. These constituent parts are themselves composites of smaller parts, or subsystems. The reductionist process of dividing systems into ever smaller parts is carried out at as many levels as one can. As the reductionistic models move further from the holistic sense of a unified selfhood, systems are, simply speaking, considered nothing more than the sum of their parts.

A similar process takes place in the practice of Vedanta, where the self (often referred to as the ego) is deconstructed as a false sense of unity. In the perspective of ultimate existence, no ego actually exists. However, Vedanta and scientific reductionism differ in one critical aspect: The deconstruction of parts leads in opposite directions.

In the case of Vedanta, the deconstruction of the objects of inquiry—physical, mental, and emotional objects that occupy our cognition—is only one step. The subject of inquiry—the who am I question—is what leads to the final outcome. The process of deconstruction is carried out through various prescribed means. One method is jnana or knowledge; another is through dhyana or deep meditation; yet another is through karma at the level where action occurs spontaneously without any sense of being the agent of action; and finally, bhakti or complete surrender of the algorithmic self (i.e. ego) to the divine. Upon the cognitive dissolution of the ego, all experience is recognized as springing from a deeper level of being and a sense of more profound Absolute Self—with a capital S—known as the Atman.

Although the conventionally experienced self is discovered to be false in Vedanta, it is replaced by the permanent, and far more profound, Atman.

In the case of biological materialism discussed in the preceding pages, only a collection of physical parts exists with nothing beyond the physical.

….. The reductionist algorithmic model posits that sensations are nothing more than physical, biological processes. In the same way, emotions and thoughts are merely physical processes, implying that they are susceptible to external intervention, manipulation and substitution.

According to this model, feelings, emotions and thoughts from biological systems somehow mysteriously coalesce into what we call the self—the constituent parts of the greater whole, the human being. The so-called human machine assumes a self only as a biological necessity. In the evolutionary process, the self was an important psychological construct that served as the nexus for the biological machine’s success, a survival strategy in the face of challenges. Evolutionary competitiveness determined the outcome: Biological entities without a notion of self were handicapped and failed to evolve the best survival skills. They lost out to competing entities that developed a presumed sense of self and behaved according to that sense. This argument is analogous to the idea that a sports team or an army has a better chance of winning if the group has a cohesive identity comprising all its members, compared to a rival group that lacks a collective selfhood. The self is simply an identity that serves the pragmatic function of competitiveness.

Humanism posits that absolute truth does not exist independently of what humans have constructed. What we think of as the meaning and purpose of life is actually a set of shared narratives consisting of stories, metaphysics, laws, cultures, and so on. Such traditions enjoy a public consensus, providing a social and ideological contract among peoples, and this serves as the foundation on which society functions. In other words, all grand narratives are collectively manufactured stories with a practical purpose: to provide us with meaning in what we do. They are the glue, even if at times the crazy glue, that holds society together.

…The core myth that characterizes liberalism is this: There is no transcendental intelligence, and we must be guided by the human-centric starting point. Humans possess free will, and this free will must be accorded the highest empowerment. Liberal politics empower the voter. Liberal economics empower the customer. Liberal aesthetics empower people to define their own ideas of beauty. Liberal ethics entitle everyone to pursue happiness, however they define it. Liberal education empowers free thought. Modern science and technology are built on the liberal premise of humankind’s rights and powers over the cosmos.

Ironically, AI is on the course to overthrow liberalism and its substratum, humanism. Yet this new AI technology is itself a creation of humanism through the following process:

In other words, the products of humanism are defeating the myth of humanism.

Once AI has taken control of the social sciences research apparatus, it will create a new grand narrative that will make the obsolescence of human agency and labor seem normal, even desirable. For instance, some thinkers already recommend that to resolve the crisis of unemployment, society should decouple work from social status. Unemployed people would then be afforded human dignity by being guaranteed basic needs including entertainment, and the loss of employment would not carry its current social stigma. In effect, these authors are preparing humanity for large-scale unemployment by somehow making it desirable to passively enjoy the sensory delights offered by new AI technologies without having to work.

People will accept this shift as a gift: they will no longer have to work or even make choices for themselves. They will gladly become subservient to whatever customized pleasures are doled out to them; machines will run their lives for them, for their own good. Dumbed-down people will be provided with all their emotional needs and gratification, which will, in turn, make them even more passive and easily controlled, thus paving the way for a small number of artificially augmented superhumans to become the new elite.

I call such a disruption of society the crash of civilization. During this period, the humans being downgraded will still need to be fed and have their emotional and psychological needs met.